Congratulations to Team Scotland (Team Hardie) won the World Mixed Championship on Sunday beating Canada in an extra end in the final. Curl Aberdeen member Rhiann Macleod was part of the team to win gold with Scotland, Playing third in the team.  You can watch the final here. 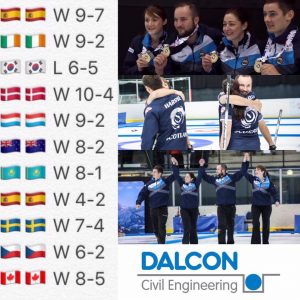 Curl Aberdeen held the Scottish Mixed Championship over the weekend 12th – 15th October. We had a few members competing in this national event with Tom & Kim Brewster, Rebecca Morrison & Fraser Kingan. Tom & Kim played together as a team and finished in a 4-way tie for 1st, and played team McCleary in a tie-breaker on Saturday, but were put out before they could reach the quarters on the Sunday morning.  Rebecca Morrison played with Robin Brydone, but they didn’t make it out their group. Fraser Kingan and his partner Jayne Stirling topped their group meaning they went straight to the Semi’s, and onto the Final where they beat Team Lammie in the final. Congratulations to Team Kingan and good luck at the World Mixed Doubles in April. RCCC report can be found here.

Congratulations to Team Morrison on winning the Kinross U21 Slam. She played Team Davie in the final.

Report of the final can be found here.